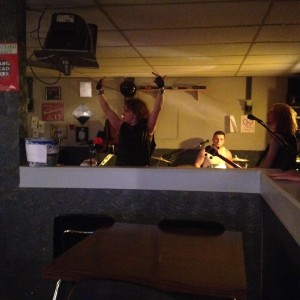 Amazing performance by this young man and his band, you can follow them on facebook at this link: DuelRocks

I remember many years ago when Duel’s mom Terri brought her son to the Monroe bar on Saturday night to sing karaoke with the grown ups.  He was a little shit that had apparently inherited his mom’s talent for music.  He started out singing a song one night and must have enjoyed the experience of being up on stage.  Soon he became a regular singing a lot.  Roger Ness and I have the same memory of him singing a Guns & Roses song called Paradise City and he really got into the song.  At one point he was laying on the floor vibrating while singing; the crowd was both laughing and in aaaw at the same time.  Well he has refined his skills since then and he still sings Paradise City in his performances.

Last night I was sitting in the front as you can see from the picture and I felt like I was witnessing a major rock band that could easily be in a packed house in Sanford’s new auditorium.  It was a surreal night and I am happy to have been a part of it.

Branch Cleanup Day - Saturday May 21st
Stack tree branches along the side of your street and the city will come by on Saturday and haul away as much as possible.

City Wide Cleanup - June 4th
Stack items along the side of your street that the Marion rubble site will accept.
Marion Rubble Site
City staff will haul away as much as possible.